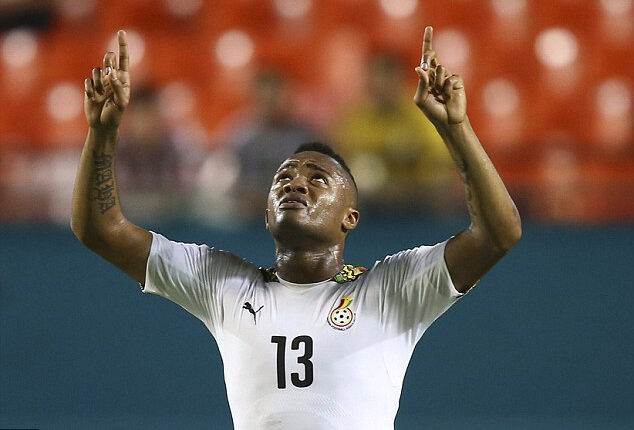 Ayew’s first two goals were split by Gyan’s strike in the shadows of half-time, as the 28-year-old Ghanaian skipper continued his record of scoring in every match between the Africans and South Korea. In the 89th minute, Ayew completed his hat-trick with a volley from Albert Adomah’s cross.

The friendly at Sun Life Stadium was the fourth meeting between the two countries and Gyan notched his fifth goal against South Korea as Ghana ended a two-game losing streak in their final fixture before the FIFA World Cup.

Ayew, who came on for Abdul Majeed Waris in just the sixth minute, put Ghana ahead five minutes later with a deflected strike and Gyan doubled their lead in the 44th minute with a cool finish on a counter-attack.

In the 53rd minute, Ayew stretched Ghana’s lead further and sealed his treble late on, ensuring they bounced back from consecutive 1-0 defeats to Montenegro and the Netherlands before they begin their World Cup campaign against the United States on June 16.

Ghana coach Kwesi Appiah made 10 changes from the starting line-up he sent out against the Dutch on May 31 with only Kwadwo Asamoah retaining his spot.

Sulley Muntari and Mohammed Rabiu anchored midfield, behind Kevin-Prince Boateng, Andre Ayew and Waris, with captain Gyan up front in an XI that could be very similar to the one Appiah selects against the USA in their Group G opener.

South Korea coach Hong Myung-bo made just two changes from his team’s 1-0 loss to Tunisia on May 27, with Kwak Tae-hwi and Kim Chang-soo slotting into the back four for Hong Jeong-ho and Lee Yong respectively.

The match started in unfortunate fashion with Ki Sung-yueng injuring Waris in the third minute with a rash sliding tackle on the halfway line.

Waris was substituted soon after with Jordan Ayew coming on and the substitute quickly made an impact in the 11th minute, getting on the end of his brother Andre’s cutback and unleashed a shot, which was deflected into the net by Ki.

On the quarter-hour mark, Lee Chung-yong cut in from the right wing and curled his shot just wide of the far post, before Dauda had to come off his line to deny the Bolton winger in the 30th minute.

Son Heung-min hit the post 10 minutes later with the ball rebounding off Boye for a corner and Dauda flapped at the resultant set-piece, before Kwak knocked Kim Young-gwon’s follow-up cross into the net with his arm.

The referee spotted the infringement and ruled out the goal and just four minutes later Gyan made it 2-0 for Ghana, beating Jung Sung-ryong in a one-on-one, although the Al Ain striker might have fouled Kwak in the lead-up.

Ghana extended their lead further eight minutes after half-time when Ayew notched his second goal of the game, smashing a first-time shot past Jung’s right hand from the edge of the area, after being teed up by Muntari.

With a 3-0 lead, Ghana were happy to sit back and absorb pressure.

South Korea kept pushing for a goal in an effort to gain some momentum ahead of their clash with Russia on June 17 but the attacks of Hong’s men often stuttered at the vital moment, allowing Ghana to block or force the shot wide.

With less than half an hour to play, Kim Bo-kyung fired wide from inside the box after Lee Keun-ho’s effort had been blocked, while Lee Yong’s shot was smothered by a Ghanaian defender soon after.

In almost the last play of the match, Ayew got on the end of Adomah’s cross for his first international hat-trick, which should ensure the Marseille striker will start against the USA if Waris does not recover in time.

South Korea finished with 59 per cent possession but none of their 12 shots forced Dauda into a save.