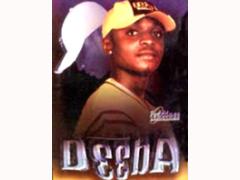 His arrest however did not come without drama, not because he was arrested by Police but because of the involvement of ace investigative journalist, Anas Aremeyaw Anas and his Arabian friend, Sheikh Ibn Abu Talib.

Deeba was invited to a 5 star hotel here in Accra on Tuesday morning under the pretext of attending a music audition for already established music stars willing to revive their ambitions. It was during this time when he was giving a free style of his famous ‘Deeba’ track that Police men from INTERPOL section of the CID came in to arrest him.

Deeba is alleged to have repeatedly defiled his eight year old step daughter of his fiancee in the United Kingdom, between 2006 till 2008 when he returned to Ghana.

After years of investigations and with a fat dossier on his actions, UK INTERPOL requested their counterparts in Ghana to help arrest him. That was when our reporter was contacted to help arrest the suspect who was in the country.

Anas (Queen Petra), was again in disguise, seated as a female member on the auditioning panel, in an elaborate black wig, high heel shoes, with artificial breasts, buttocks and face mask with detailed makeup. The face mask was produced by a movie props company in London, the United Kingdom.

He was dressed in a pink outfit laced with black flower designs. He had his red manicure, with red lipstick to match, a ruby necklace and bracelet, capped with shiny scarf. He also wore light brown slacks to match. Other members of the panel included a top television director, a member of the INTERPOL and Sheikh Ibn Abu Talib.

According to a legal document titled ‘Summary of Evidence’ a copy of which is in the possession of this paper, Deeba returned to Ghana from United Kingdom after living in the UK with his fiancée, with who he has two biological kids.

His sexual exploits though were on the elder step daughter of his fiancée from an earlier relationship. The document states in parts that: “in September 2008, Akyampong left the United Kingdom and returned to Ghana. Two weeks after his departure, the girl (name withheld – who was now eight years old) told her mother (name withheld) that Akyampong had been “sleeping with” her, and that he had been using his “thing.” (The mother) understood this to mean that Akyampong had been having sex with her.”

Deeba’s actions were occasioned by the fact that he was alone with the children at their home (place withheld) because their mother worked on night shift, the reason why he moved in later to stay with the family.

Portions of the girl’s testimony to UK investigators related how he (Deeba) forced the girl to watch pornographic material before having sex with her. According to the ‘Summary of Evidence:’ “she (the young girl) stated that she had seen “white stuff” come out of his penis several occasions. She also disclosed that Akyampong had put his penis in her bottom a couple of times and that it had hurt.”

A medical examination by a forensic physician revealed later in 2009 that extensive damage had been done to the hymen of the young girl and that “there was full thickness hymenal laceration at the 5 o’clock position extending from the hymenal opening to the vaginal wall. This injury was consistent with the girl’s report of vaginal penetration,” it concluded.

There is also the issue of multiple identities on the part of the accused, who used several names amongst others such as: Richard Nimoh, Deeba Kofi Akyampong, Richard Nimoh Deeba and Deeba Kofi, same was the case with his dates of birth which varied between 1977 and 1979

The possible line of action is that INTERPOL Ghana would most likely extradite him to face the necessary charges in the UK.

Stay tuned as we follow his extradition and trial in the UK.