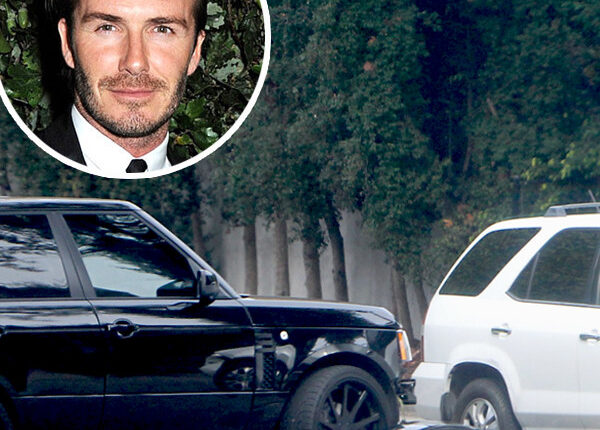 English footballer David Beckham got involved in a minor car crash on Friday, October 25, hitting an oncoming car as he drove his black Range Rover Sport out of the driveway of his Beverly Hills home. With him in the car was his 14-year-old son Brooklyn, who was seated on the front passenger side when the accident happened around 2:30 P.M.

The collision left Beckham’s $75,000 SUV with a hanging front bumper and the unidentified woman’s white Acura 4×4 with a damaged front mudguard, but fortunately, no one among those involved in the fender-bender was injured. Those who witnessed the crash said the former Ligue 1 player reversed back into his driveway as he waited for the cops to arrive at the scene.

Authorities came to question Beckham about the incident, as they were seen leaving his home before interviewing onlookers for additional information. It was reported that neither driver exchanged pertinent details and neither had any plans to take action against the other, there being no injuries.

In 2011, the father and son duo also got involved in a car crash, but it was more serious compared to Friday’s incident. Their vehicle got into a multiple car pile-up along a Los Angeles freeway, but they luckily escaped it without being hurt, thanks to their seat belts which they were both wearing during the time of the accident.