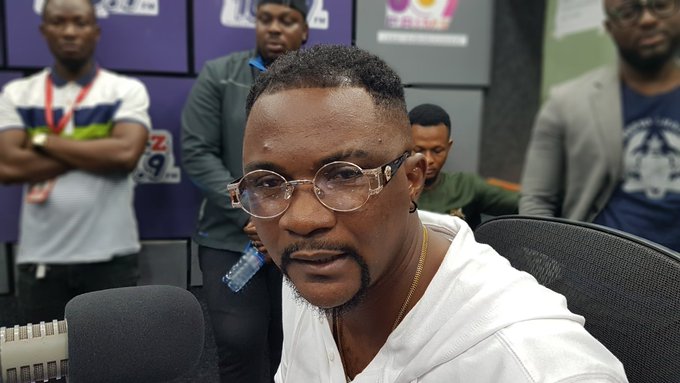 It is quite normal for people to share their biased or unbiased opinions on creative materials but it’s one thing saying A on record and denying the next moment!

That’s exactly what Mr. Logic finds himself in.

Strongman and Accra based radio panelist Mr. Logic are currently the subject of  an online conversation.

The conversation stems from the fact that Mr. Logic on Hitz FM described  Strongman’s verses on Riddim of the gods produced by  JMJ as the weakest he’s heard so far.

.@StrongmanBurner's verses on Riddim of the Gods is weak. @sarkodie, I do not want to judge him. Based on punches, I will go for @elgh_. @TeePhlowGH also did great. – Mr. Logic. #DaybreakHitz

This comment did not sit well with the musician who responded sharply highlighting  Mr. Logic’s ‘dislike’ for him.

Coming from a man who has not given me a pen before but said im ungrateful
Someone who said I’m disrespectful for saying the truth about the hammer issue
I’m not shocked
Bro I’m bigger than hate do something better#TooMuchWeed https://t.co/CJoxWQGeRm

As opinionated as Mr. Logic could be,  he would not let Strongman’s comment go by as he also responded saying;

IF I start to hate you your VIM for the M.IC will SHIBBLE DOWN"
Don't ask for it young king" What you heard is called Critical Analysis"@StrongmanBurner @Hitz1039FM @ElormBeenie @JmjBabyGH

Reacting to  tags of being a ‘hater’ a day after passing his initial comments, Mr. Logic said his comments were constructive “and not from a place of hate” as  it’s being tagged.

I do not hate @StrongmanBurner. They should stop all this hate tag. He did not go hard on the Riddim of the Gods. Play other Strongman tracks and let's see. It is not from a place of hate. – Mr. Logic. #DaybreakHitz

This would still not sit with fans of the artist who went back into sharing a video that suggests Mr. Logic never likes Strongman.

The video shared by Strongman’s manager suggests exactly the opposite especially as Mr. Logic is heard clearly on the same platform expressing his dislike for the artist.

In the video, he’s heard saying “From day one, I have never liked Strongman and I’m not going to shy on radio to say it..”

7 months ago, this Mr Logic said He has never liked Strongman (video below). And today He’s saying otherwise?Bra @andydosty I know you perfectly know this man doesn’t like Strong. We are not looking for his acceptance, but hate shouldn’t cloud his judgment on your show @jmjbabyGh https://t.co/lwdfGx87NH pic.twitter.com/TgONEB8UEM

Have you heard any of the songs of f Riddim of the gods? Share with us which one you’re enjoying most.