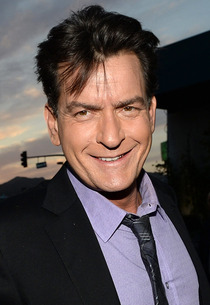 Charlie Sheen is going back to his roots for Machete Kills. According to a screengrab obtained by TMZ, Sheen will be billed by his birth name, Carlos Estevez, for the upcoming film.

Though Sheen told  Univision last year, “I don’t wake up feeling Latino. I’m a white guy in America,” it seems he’s once again ready to embrace  his Latino heritage after changing his name to Charlie at the age of 4.

Though Sheen’s decision to go by Charlie was simply to avoid confusion with an uncle also named Carlos, when he became an actor, he took on the last name Sheen to follow in the footsteps of his father Martin Sheen. On the other hand, his brother Emilio Estevez kept his birth name.

Martin Sheen has expressed his sadness at not using his birth name, Ramon Gerardo Antonio Estevez. In a 2003 appearance on Inside the Actors Studio, he told James Lipton, “One of my great regrets is that I didn’t keep my name as it was given to me. I knew it bothered my dad.”

Hopefully his son’s recent decision to go by Carlos Estevez, even temporarily, will make papa proud!