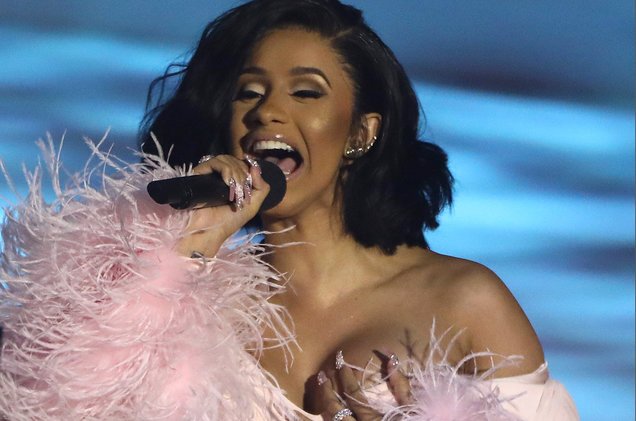 It was only a matter of time for Cardi B to hit the top of the Billboard charts and that day is finally here.

Yes, Cardi B becomes the first female rapper to top the Billboard Hot 100 chart without the assistance of any other credited artists in nearly 19 years, as her debut hit “Bodak Yellow (Money Moves)” rises from No. 2 to No. 1 on the latest chart (dated Oct. 7).

“Bodak,” released on The KSR Group/Atlantic Records, makes Cardi B (born Belcalis Almanzar, in the Bronx, New York) just the second female rapper to top the Hot 100 without any other billed artists, following Lauryn Hill‘s first solo Hot 100 entry (apart from the Fugees), “Doo Wop (That Thing),” for two weeks beginning with its Nov. 14, 1998, debut at No. 1.

Cardi B is only the fifth female rapper ever to lead the Hot 100 at all. After Hill, Lil’ Kim ruled for five weeks in 2001 with Christina Aguilera, Mya and P!nk on “Lady Marmalade”; Shawnna reigned as featured on Ludacris’ “Stand Up,” which topped the Dec. 6, 2003, chart; and Iggy Azalea‘s introductory Hot 100 hit, “Fancy,” featuring Charli XCX, led for seven weeks in 2014.

Cardi B is also the first female soloist to top the Hot 100 with a debut track unaccompanied by another artist since Meghan Trainor, whose “All About That Bass” led for eight weeks beginning Sept. 20, 2014.

“Bodak” bullets at No. 2 on the Streaming Songs chart with 46.4 million U.S. streams, up 14 percent, in the week ending Sept. 21, according to Nielsen Music. It bounds 12-3 on Digital Song Sales, up 85 percent to 56,000 downloads sold in the week ending Sept. 21, marking the Hot 100’s top gain in download sales (aided by a 69-cent discount price in the iTunes Store). The track also lifts 16-13 on Radio Songs, with 62 million all-format audience impressions, up 8 percent, in the week ending Sept. 24. (“Bodak” spends a fifth week at No. 1 on the Rap Airplay chart and a second week atop R&B/Hip-Hop Airplay; crowns the Rhythmic Songs airplay chart, with a 3-1 rise; and debuts on Pop Songs on at No. 37.)

Notably, for a second straight week, a song tops the Hot 100 but is not the week’s No. 1 title in streaming, airplay or sales; still, it accumulated enough overall chart points to reign.

As for Atlantic Records in 2017, thanks to Cardi B’s new No. 1, multiple leaders on the label have ascended to their first weeks at the Hot 100’s summit in the same calendar year for the first time since 2012, as Ed Sheeran‘s “Shape of You” ruled for 12 weeks from its debut at No.  1 in Jan. 28. Five years ago, Flo Rida‘s “Whistle” and Bruno Mars‘ “Locked Out of Heaven” each ascended to the top for Atlantic.

Cardi B’s breakthrough hit also spends a sixth week at No. 1 on the Hot Rap Songs chart and a fourth frame atop Hot R&B/Hip-Hop Songs.

Applaud Lord Kenya And Rehabilitation Centre Than Malign Them –…