‘Captain Planet’ Film Officially in the Works at Sony 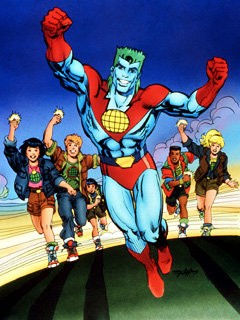 “Captain Planet and the Planeteers” movie is officially under development at Sony Pictures, Entertainment Weekly learns. The site confirms the coverage of The Hollywood Report, which broke the news first, reporting that the big-screen version of the environmental cartoon is indeed to be produced by Mark Gordon, Don Murphy and Susan Montford.

The 1990s toon series told the story of five teens from around the world who were chosen to be the bearers of powerful elemental rings which would help them protect the planet from the devastation of looters and polluters. Dr. Blight, Verminous Skumm and Duke Nukem were some of villains that the Captain and the Planeteers faced off against.

Andrea Giannetti will oversee the production for Sony. As of now, no director and screenwriter have been secured to work on the project yet.

A feature adaptation was initially about to take form in the 1990s, but it only reached the script stage. In the late 2000s, Murphy and Montford almost succeeded to turn the fan-favorite series into a Cartoon Network pic, but it again failed to come true following a new pro-pollution policy adopted by the Network.