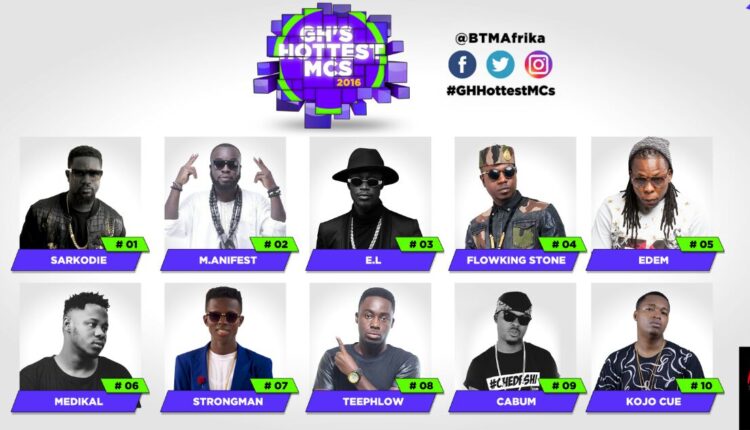 The first of its kind carried out by the media outfit sees Ghana’s most decorated rapper of all time sit comfortably at the top followed by M.anifest who sparked the biggest conversation after his “diss” track targeted at Sarkodie.

According to CEO of BTM Afrika, Ebenezer Donkoh, the aim of GH Hottest MCs list which will be released annually is to celebrate Ghanaian MCs who despite the challenging times and tight competition from other genres including Afrobeat (which seems to be the new sound of Africa) strive for excellence with rap music.


“2016 saw a number of MCs do excellent with their rap game but just like any credible list, we had to go through the task of finding the hottest 10.

The panel but for Hammer of Last 2 Music Group, had to do a great assessment of the individual MCs based on a number parameters including impact (year under review), lyrics, buzz, style and other factors that make them stand out from the crowd.

This year was also subjected to reviews from various radio presenters, DJs and a number of social media influencers to finally arrive at the list we have today”

For claiming the top spot, Sarkodie wins a weekend stay at the all new Bays Lodge & Apartment.