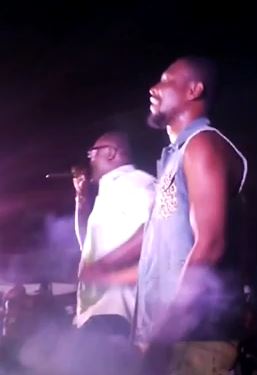 CEO of Empire Entertainment and drive time host on newly established Accra based Starr FM, Bola Ray after almost 40 minutes of witnessing an energetic performance from Jerry Anaba popularly known as Okomfour Kwadee over the weekend could not hide his excitement as he joined him during the start his four city club tour in Kumasi.

Bola Ray described Kwadee as one of the few musicians who has kept hiplife music alive.

According to Bola Ray, “I flew all the way from Accra just to come support Okomfour Kwadee”

Watch video from below as Bola Ray showers money on Kwadee, talks about his great spirit and more.