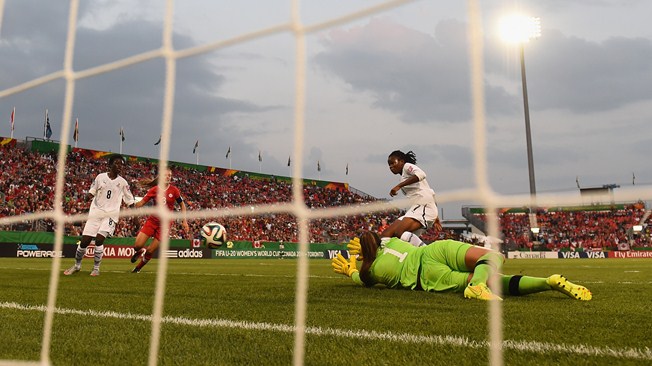 A lone strike from the Black Princesses’ Sherifatu Sumaila midway through the opening half proved the difference, and leaves Canada with little margin for error in their remaining Group A matches against Finland and 2006 champions Korea DPR.

A fast-paced opening set up an entertaining first half, even if gilt-edged chances remained at a premium. Canada defender Kadeisha Buchanan made several important interceptions but she could do little to prevent Sumaila breaking the deadlock on 22 minutes.

The goalscorer weaved past several defenders before feeding team-mate Edem Atovor. And when Atovor’s low cross was not dealt with by the goalkeeper, Sumaila took full advantage from close range.

Canada’s best chance arrived a few minutes before the interval as Emma Fletcher struck Victoria Agyei’s post with an effort from the left.

The hosts, urged on by a vociferous 14,834 strong crowd, built momentum throughout the second half but fell agonisingly short of an equaliser as they pressed hard in the dying stages.

At the other end Ghana created few chances but they looked steady for much of the match, aside from the late onslaught.

Nichelle Prince added spark for Canada when she entered the fray on the hour mark. Most notably, the speedy left-sided Prince saw a shot on the turn saved by Agyei.

Canada turned the screw in the final ten minutes with Ashley Campbell pushing a header wide, while Buchanan did likewise in injury time from Prince’s cross.

Live Your Goals player of the match: Victoria Agyei (GHA)

Davido finally addresses beef with Wizkid; “I was upset about his shade”