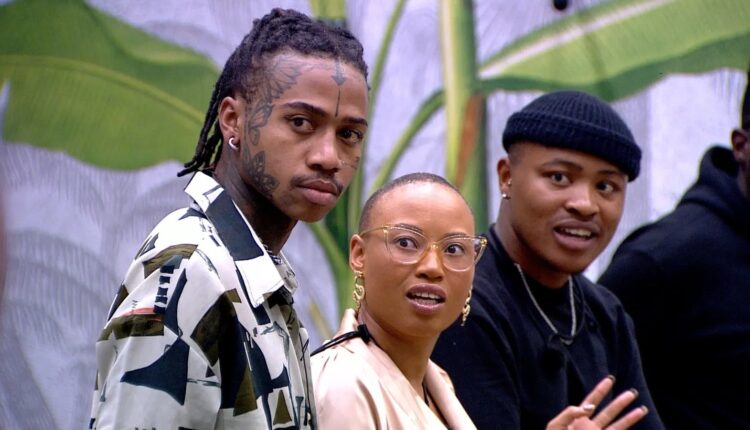 The stakes got higher with two more Housemates joining the #BBMzansi House.

On January 30, 2022, the Sunday Live Show gave the Housemates a bittersweet experience as they all unknowingly spent their day packing and getting ready to exit Biggie’s House.

However, we all knew that no one was being evicted from the House, but this didn’t stop the Housemates from experiencing the tension and pressure that come with being on the chopping block.

Makhadzi opened the Live show with her iconic footwork, making a grand slam entrance that set Big Brother’s stage on fire – even our Host Lawrence Maleka couldn’t help sneaking in a few moves.

The Housemates with the most nominations for tonight’s fake eviction were Acacia, Gash1, Mvelo, Norman and Themba – although the Housemates were told that they were all up for Eviction.

However, Biggie is as unpredictable as they come and decided to throw off some power dynamics in this House by introducing two more Housemates into play for that R2 million cheque.

The first new Housemate to enter Big Brother Mzansi House is the 27-year-old student-athlete, Nthabii. She says she’s bringing in the drama, and Housemates should expect some fearless competition.

The second Housemate to enter Biggie’s House was the eclectic artist with an edge – Vyno. He describes himself as an eclectic mix of an emotional artist and a business-savvy entrepreneur.

Get to know this Housemate here.👇

Although the #BBMzansi Housemates preach about “staying woke”, we wonder how far they can move into the game with their observations and analyses, given that Biggie is as unpredictable as they come.

For now, the Housemates are safe from Eviction and will enjoy another week in the House. However, Biggie is ready to have some old Housemates exit the game, and Nominations for possible Eviction will begin on Monday 31 January 2022 during the Nominations Show.

Nthabii, Vyno and the new Head of House for the coming week will be immune from possible Nomination.

Miss USA Passes Away After Jumping From NYC Apartment