Beverly and Melvin out of Big Brother Africa 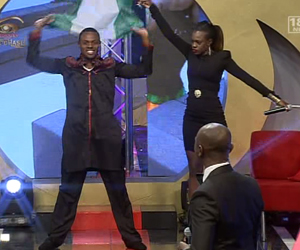 After holding on for dear life and making it to the Finale, Nigeria’s hopes of snatching the Chase crown went up in flames this evening, when Beverly and Melvin became the first two Chasemates in the Top 5 to be booted out.

The two Nigerians received the lowest votes after an intense round of voting this week. You could hear a pin drop as the Housemates, all dressed to the nines, sat in the lounge and awaited their fate. With USD 300 000 at stake, it is a given that nerves would be more than frayed.

The Top 5 held hands and mumbled silent prayers under their breath. When Live Show host IK finally decided to put the Chasemates out of their misery, Beverly unfortunately was the first to get the chop. Beverly ran her Chase race like a true soldier and made history for having never been Nominated for possible Eviction during her entire stay in the Big Brother House.

The sexy lingerie model even Chased love and eventually found it in South African choreographer and fellow Chasemate, Angelo. Melvin, on the other hand, was a model of sheer humility and kindness and proved to be very thoughtful throughout his Chase. The Nigerian became the first and only Housemate to sacrifice himself during a particularly difficult Nominations week.

Melvin, who was Head of House at the time, decided not to save himself from the Eviction gallows and left the Nominations list as is. Last week, he also chose to forego the possibility of winning himself jewellery worth USD 1 000 and gave his fellow Chasemates the opportunity to fight it out amongst themselves.

Despite not winning the USD 300 000 grand prize, we are proud to say that these two young African’s are winners in their own right! Congratulations to them for reaching the Finale!

Elikem loses Out on $300,000 Prize Package At Big Brother Africa