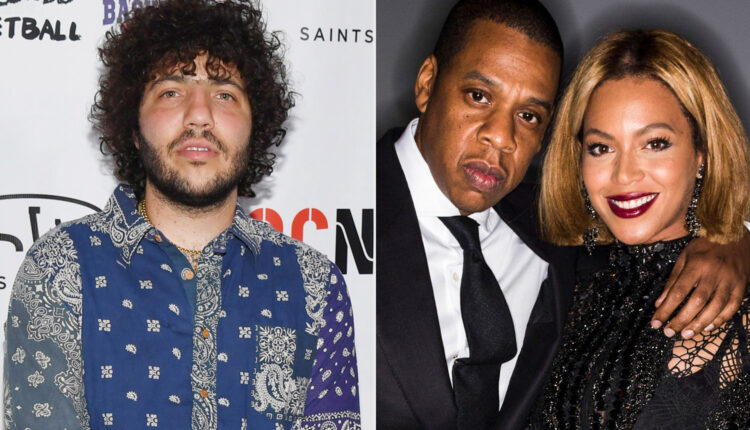 Benny Blanco is kissing and telling.

What happens in the Hamptons doesn’t always stay in the Hamptons. Case in point? Benny Blanco didn’t keep his lips sealed about what happened one night at Beyoncé and Jay-Z’s house 10 years ago.

In an interview with Apple Music’s Zane Lowe on Wednesday (March 24), the superstar producer revealed how close he got to Queen Bey while staying in her house in the Hamptons around 2010, and how his “very European” greeting went south.

Blanco recalled participating in a beat battle with other producers such as Hit-Boy at the request of Bey. “I’m playing beats, and Jay-Z is there and we’re just drinking, chilling. He comes up to me and he’s freestyling in my ear,” he told Lowe. And I’m like, ‘Jay-Z is sitting here, getting drunk with me while Beyonce is singing little riffs, and he’s freestyling in my ear. And we’re about to all go in the pool after.’ It’s these moments, I’m like, ‘How is this my life?'”

But that’s not “the craziest story” yet. On the third night of his stay, the “Lonely” artist debated how to properly bid adieu to one of the biggest pop stars. A hug? A simple “Bye”? A kiss on the cheek?

“I’m very European. You go in and you do that. … And I went to do like, kiss on the cheek, and I guess we just missed a little bit. And just like, I definitely hit the corner of some sort of lip. I’m like, ‘Oh my God. This is the worst thing in my life,'” he said. “And I’m sitting there, and as I’m doing it, out of the corner of my eye, Jay-Z is right there looking at me. And I’m just like, ‘My lip is here. Hers is there, and there’s definitely some corner things are happening.’ And I look at Jay and I’m like, ‘Oh, OK. I’m dead. My life is over. It was great. Nice knowing you guys.’ This man is going to be in a coffin tomorrow. My life flashed before my eyes. And I’m sitting there, and I look. And then, he’s like, ‘All right, bro. See you tomorrow.’ Like, no one noticed.”

Although Blanco and Beyoncé never made music that was released from that trip, he counts the lessons he learned from her and Hov as the “best” experience because to him, “it’s about the journey.” Blanco has observed Billie Eilish’s journey from the start, attending her first shows of just 100 or so people in the crowd when the “Ocean Eyes” singer was just 13 years old. While her budding career eventually blew up, Blanco and Finneas’ budding friendship helped songs such as “Lonely” with Justin Bieber come about and thrive.

“We finally get in the studio one day. We’re like, ‘Let’s make some s— for Justin. We’re right here. He’s right there.’… And then we finished the song and I’m like, ‘Finn, I want that ballad. We need to do that. I want that ballad.’ I want to get the feeling. He’s the best in the world at writing. But I want that ‘When the Party’s [Over],’ I want to cry,” Blanco said. “So he’s like, ‘You want the ballad?’ And I’m like, ‘Yeah.’ And so he sits down at that piano right there, Wurlitzer, and he’s sitting there. I’m right there. We’re talking, we’re saying like, ‘Oh, what should we do it about?’ And then 30 minutes later, we got the song.”