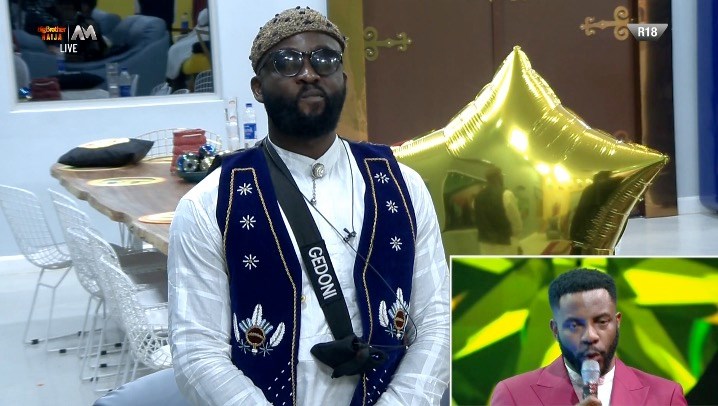 It is yet another Sunday and that means one of the  housemates of BBNaija 2019 would have to go home.

Well, Ebuka has recently announced that Gedoni has been evicted.

Being the first Housemate to be Evicted tonight, Gedoni had his final stop in the Pepper Dem race. He seemed to have handled his exit well and was caught dropping on his knees after his Eviction announcement by Ebuka. We wish him the best in his future endeavours.

Dressed in his gorgeous traditional attire, Gedoni admitted to Ebuka on the Stage that he was drawn to Khafi because of her positive energy and ability to stay true to herself. When asked what else he enjoyed in the House asides his relationship with Khafi, he mentioned his moments during the games.

Gedoni plans to expand his clothing line amidst other business ideas down the pipeline. We can’t wait to see him excel in his future plans. Good luck, Gedoni! Jackye was the second Housemate to be Evicted tonight and the twelfth Housemate to take an exit from the Pepper Dem race.

According to her, her hardest part in the House was staying in the same space with some of the Housemates with negative energy in the House. When asked if she showed herself enough, she revealed to Ebuka that she was herself in the game and only took her time to know the Housemates first before loosening up.

“Mike is my guy,” she said when asked who she’ll miss in the House the most. To her, Mike was a big brother and a true friend who always put her in check in the game.

Also, she did not fail to tell us that she’ll be taking her Artificial Intelligence (AI) project further after the Big Brother game.

To seal her final words on the Stage, she confessed that she’s rooting for Mercy to be crowned the winner of the Pepper Dem Season, ash she would want a female to win the show.

When asked about the reason behind their hot and cold moments in the Icy ship, Ike explained to Ebuka that theirs is a result of two individuals who are fire and as a result, will bring about an explosion. However, following the issued Strikes tonight, the two have decided to start doing better in being careful and sticking to Biggie’s rules.

In addition to their spicy confessions, Gedoni told Ebuka tonight that on the subject of the third party in his relationship with Khafi, he only sees one person as a priority – Khafi, of course! He also did not fail to mention that his attempts to bring Venita and Khafi together have proved abortive. In his words, “I told Venita that I chose Khafi already.” The question Ebuka left him with was if he proved that this week, seeing that he failed to stand up for her many times she was put down verbally by Venita.

What To Look For When Hiring A Band