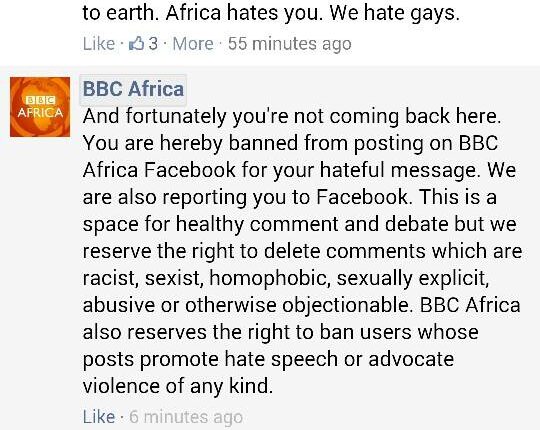 Popular comedian, Hip-life musician and political satirist A-Plus real name Kwame Asare Obeng has been blackballed by the British Broadcasting Corporation (BBC) AFRICA for a comment on their Facebook wall.

Controversial A-Plus who is also an anti-gay campaigner stated categorically on the international platform that, Africans hates homosexuality’s despite the imposed by some foreigners leaders to make it legal.

His comment came after Uganda’s leader has signed into law a bill toughening penalties for gay people but without a clause criminalizing those who do not report them.

However, US President Barack Obama had cautioned that the bill would be a backward step. He described it as “more than an affront, and a danger to, Uganda’s gay community. It will be a step backwards for all Ugandans”

But A-Plus who seems upset with Mr. Obama’s statement posted on BBC AFRICA Facebook wall that “There is a one way mission to Mars. All gays can join. Fortunately you are not coming back to earth. Africa hates you. We hate gays.”

In a sharp riposte, BBC AFRICA publicly banned the Ghanaian musician by saying, “And fortunately you are not coming back here. You are hereby banned from posting on BBC AFRICA Facebook for your hateful message. We are also reporting you to Facebook. This is a space for healthy comment and debate but we reserve the right to delete comments which are racist, sexist, homophobic, sexually explicit, abusive or otherwise objectionable.”

Adding that, “BBC AFRICA also reserve the right to ban users whose posts promote hate speech or advocate violence of any kind.”

Kwame Asare Obeng (A-Plus) also known for his hit track “Mesuro mpo na merekeka yi o” further posted that “Tweaa! Come to Ghana and you will get what that means. Still no gays in Africa.”