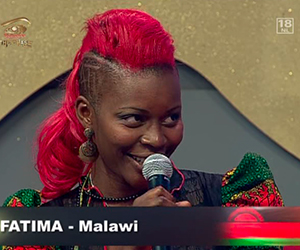 Tears and screams echoed in both Houses as both made an emotional exit from the Big Brother House.

This week had looked to be Hakeem’s lucky one as he won the Head of House chieftainship on Friday. This week was a 7th heaven for him as he got to play the role of a loving husband to his real life lover Cleo as part of the Wedding Task. At the Task Presentation on Thursday the two had an emotionally charged Wedding ceremony that saw the Diamond fellow bring his woman to tears with a sweet serenade. But tonight his luck finally ran out.

On the other hand for Fatima, after managing to make it to the halfway mark without ever being on the Eviction Nominations list Fatima’s luck ran out this evening.

This week was the first time that the young TV presenter had been put on the Eviction chopping block. During the Nominations on Monday she managed to get the highest Nominations in the Ruby House because her fellow Housemates had enough of her ever changing moods.

Iyanya on Toolz’ Waist Too? Check It Out!!