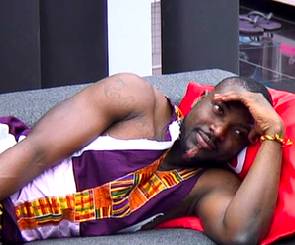 Biggie has announced this week’s Nominees that are up for Eviction come Sunday night.

On his list for the Ruby House he had the lovers Elikem and Pokello whereas in the Diamond House he had Annabel, Bimp and the lovely Dillish.

When the Head of the Ruby House, Sulu, went into the Diary Room and was asked who he’s save and swap, he opted to save his pal Elikem and swapped him with South Africa’s dance choreographer Angelo.

In the Diamond House, Head of House Bimp who had been Nominated as well opted to save himself and threw Bassey under the bus.

Bassey was once Nominated in the beginning of The Chase and has never reappeared since, until today.

So this might come as a shock to him if he is Evicted on Sunday. Could Bimp have some hidden beef for the flamboyant Sierre Leonean or was he literally saving his own skin for his own survival on The Chase.

So that’s that as far as Nominations are concerned and all we can do is wish our Nominees well and that Africa votes wisely. Let the Chase commence!

Angelo, Annabel, Bassey, Dillish and Pokello are up for possible Eviction this week.