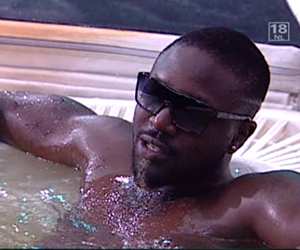 It might seem like our Ghanaian representative is making more moves on The Chase than any other Ghanaian over the years of Big Brother. He just had to boast about his achievements on the show, as any guy who’s won Power of No and became Head of House in one week would.

As the Housemates chilled in their lounge drinking their preferred drinks, Elikem thought it the perfect moment to boast about the fact that he was the only guy on this season of Big Brother who had won Power of No and became the Head of House, all in one week and his fellow Housemates couldn’t grudge him on that because it was true.

Elikem, who is a businessman and an actor back home, came into the House and played the game the best way he knew how and he’s still in the House after 80 days of The Chase. Surely this is commendable because he’s managed to outsmart the likes of Oneal who had thought he’s smarter than Elikem.

Dillish and Cleo complained that they had never won Head of House and that was a record for them. Dillish had always wanted the Head of House title but it has never happened for her, hopefully in the next two weeks of The Chase this might happen.

It might not be a game of who’s the smartest because at the end of the day Africa decides who stays but this young Ghanaian tailor has proven to be a force to be reckoned with. But whether he will make it to the end and actually walk away with the money is yet to be seen.

Do you think Elikem will be the one taking the money home?