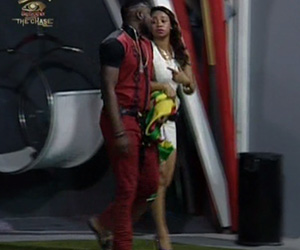 Zimbabwe’s hot and sexy Pokello has been Evicted from the Big Brother House. The ever-graceful lady simply kissed her man, Elikem before passing hugs around to the rest of the Chasemates.

There was an akward silence and a few whispers here and there as the Zimbabwean Housemate made her way through the Chasemates.

Pokello followed her favourite Housemate and best friend Bassey who became the 15th Chasemate to be booted out of The Chase.

Leaving behind her beloved Elikem is possibly one of the hardest things she’s had to do throughout her stay in Biggie’s House. But as we all know, the lovers in Biggie’s House are bound to either leave together like LK4 and Koketso or leave one after the other like Bolt and Betty.

Bassey who also left the house undoubtedly been the life of Biggie’s House since he first step foot eight weeks ago. This week he outdid himself with his role as Ringmaster in the Circus Task even though the overall performance didn’t impress Big Brother.

In his Eviction Diary session, Bimp was remorseful about his decision but admitted that he had no choice as this is part of the game.

Sadly, Bassey is now out of The Chase but rest assured that he will be missed by his fellow Housemates and possibly by Africa as well. His now ex-Housemates were very emotional with his Eviction. While everyone was saying their goodbyes, Bimp lay back on the couch with his face covered, clearly not believing that his decision is manifesting before his very eyes.