Awwww!! Chicago Bulls Cheerleader Shocked With Proposal In The Middle Of Halftime (VIDEO) 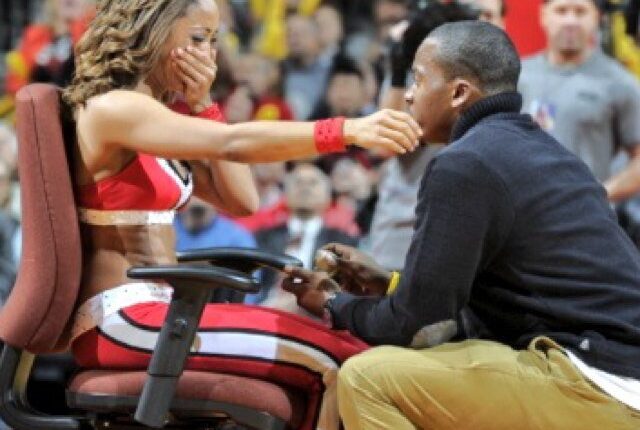 As an NBA cheerleader, it’s their job to make sure the crowd is entertained.

Well, for Chicago Bulls cheerleader Ariana Rosado, this halftime was one for her to get the entertainment…since her boyfriend proposed!

During her halftime dance routine, Ariana was in the middle of her choreography when the music stopped and switched to Bruno Mars’ “Marry You”.

As she looked as confused as ever, the rest of her teammates circled around her with new choreography she didn’t know, as the Bulls’ mascot sat her down in a chair in the middle of the court to watch.

While her dancer friends pranced around her, two inflatable mascots came out to the middle of the court and surrounded Ariana, who looked completely baffled by everything going on.

Finally, the inflatable mascot deflated to reveal her boyfriend Shane Zackery, who got down on one knee to propose to his cheerleader boo.

Immediately, Ariana burst into tears and hugged her man, and she said yes!

Watch the adorable proposal video above!