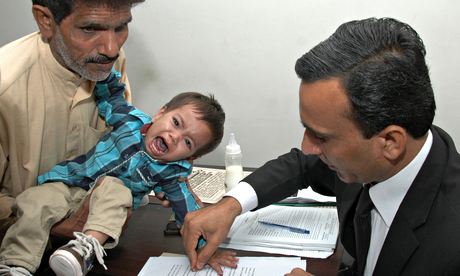 It somehow sounded funny when I read earlier that a nine month old baby in Pakistan had been accused of attempted murder but hey, we live in a crazy world now where my 7 year old niece asked me what I wanted to know about sex eduucation when I told him I thought it was right I talked to him about sex education. Funny, right?

Anyway, the charge against a nine month old baby for attempted murder has been dropped as a Pakistani judge on Saturday dismissed a bizarre case, an episode that badly exposed the many deficiencies of the country’s judicial system and police.

CBS News reports that the charges against the boy, “Mohammad Musa, stemmed from a Jan. 31 altercation between residents of a Lahore neighborhood and police, who had accompanied officials from the government-owned power company seeking to identify homes containing illegal electricity connections. Many residents of the area threw stones at advancing policemen and authorities included Musa’s “entire family” on the list of suspects, according to a senior police officer who spoke to CBS News from Lahore on condition of anonymity.

Earlier this month, the boy was taken to court, weeping as he was fingerprinted before receiving bail.

“The controversy erupted mainly because we believed Musa’s entire family was involved. This was just a big mistake,” added the officer after Judge Rafaqat Ali Qamar dismissed the case.

Western diplomats who followed the case closely said it was a powerful reminder of the many lapses surrounding Pakistan’s legal system. Human rights groups have documented numerous cases where the police have been accused of violating suspects’ rights, including using torture.

“The baby’s police case has been a reminder of how the police operates in Pakistan every day,” said one Western diplomat in Islamabad, who spoke to CBS News on condition of anonymity.

“Charging a baby means no one took enough care to verify the names and other details like ages of people who were being named,” the diplomat said.

The police officer who spoke to CBS News from Lahore said the authorities were trying to make certain that the “baby’s name is removed from all records so that he lives with a clean record.”

“In later years, we have to make certain that the baby does not have a record of criminal proceedings from the time he was 9 months old.”

Funny Photo: How Would You Label This?

Music Group Keche in Trouble; Accused of Stealing a Song

Dolly Parton Inducted Into Rock & Roll Hall of Fame Against Her…