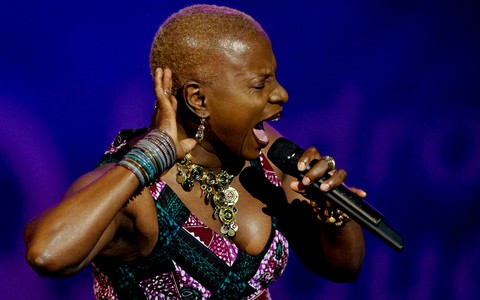 French veterans Lo’jo, who mix French folk with African and Arabic sounds, picked up the Best Group award and the young Zimbabwean band Mokoomba was chosen as top Newcomer.

The Best Cross Cultural-Collaboration went to Dub Colossus for the blend of Ethiopian roots, reggae and dub beats on their latest album “Dub Me Tender Vol. 1+2″.

Kidjo, originally from Benin, is one of Africa’s biggest singing stars. Over the years she has worked with Prince, sang at the 2010 World Cup in South Africa, and sold out New York’s Carnegie Hall.

The Best Artist award was given for her live “Spirit Rising” album but was also recognition of her career achievements, Songlines editor-in-chief Simon Broughton told Reuters.

“She’s been around a long time but she’s always inspiring,” he said. “What clinched it was a concert she gave in London in March for Women’s Day. It was breathtaking. I’ve never seen her so exuberant. She bonds people and really makes it special.”

Kidjo, 52, has adopted the mantle of the late South African singer Miriam Makeba as a political voice and campaigns for women’s rights and education in Africa.

“The award is also for what she stands for,” Broughton said.

Lo’jo, from southwest France, has also been around a long time and the band’s latest album, “Cinema el Mundo”, showed them to be as strong as ever.

“They are much better known in the Francophone world than elsewhere. They’ve not been tempted to become more mainstream,” Broughton said.

“They are a quality act, an unusual, interesting group, especially in their connections with West and North Africa.”