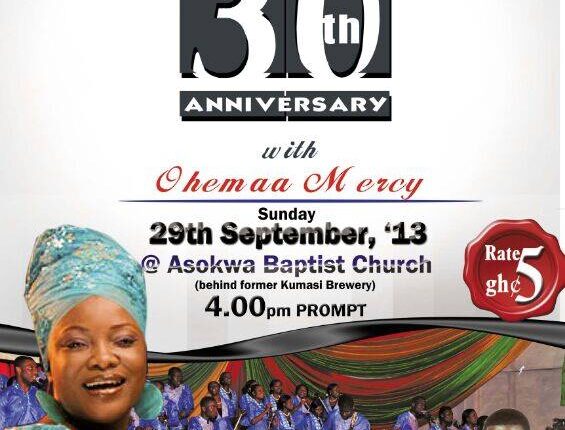 The Asokwa Baptist Church will on Sunday September 29th, 2013 hold one of the biggest and most memorable gospel music festivals in Ghana as evergreen Gospel music group Agape Incorporated celebrates its pearl anniversary.

The 30 years anniversary according to Mr. Mark Nyame who spoke to www.nydjlive.com will mark a revitalization of the group which has over the past years spread the word of God through song ministrations in various schools and churches in the country.

Speaking on plans for the 30 years anniversary celebration, Mr. Mark Nyame disclosed the celebrations will see celebrated Gospel musician Ohemaa Mercy, guest artist Elliot Lamptey and the group perform to thousands of patrons who will throng the Asokwa Baptist Church on the Sunday September 29th 2013 with songs sung and performed by the group over the years followed by gospel outreaches in various parts of the Ashanti Region.

Touching on challenges over the past years, he disclosed money generation has always been a bigger challenge as most members of the group are students who dedicate their time to song ministration therefore making it difficult to expand their outreach.

He however appealed to the public and donors to support the group as they mark the 30 year anniversary.

Photo: Captain Planet Hangs Out with fiancee(Vodafone Ghana Boss) in US