Adams Apple is no different from Kyeiwaa 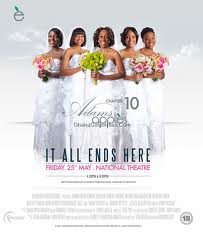 Call it glamorous and many Ghanaians will jump at it perhaps because of the cast and the brains behind the production. Adams Apple which has already reached its tenth chapter which according to the director of the movie, Shirley Frimpong Manso was to be the last per media reports is to have a continuation.

Going down on her own words, one is tempted to believe hypocrisy is trooping in with many Ghanaians and producers who chastised Danfo BA for serializing his movie Kyeiwaa. Could Adams Apple be any different from Kyeiwaa?

Shirley, Chief Executive of Sparrow Productions, is said to have criticized other movie producers for serializing their movies into several parts when they could have put the entire story into one.

There are even reports of an audio recording making rounds in which Shirley had emphatically stated she would not extend the Adams Apple series because she had set certain principles for herself.

Kwesi Aboagye of Peace fm is one of the very few who has opened talks on his surprise that nobody in the industry was talking about Shirley’s production like they criticized Danfo B.A. over the Kyeiwaa movies.

Could it really be hypocrisy or one cannot compare both movies? Could the difference be as a result of the language ?