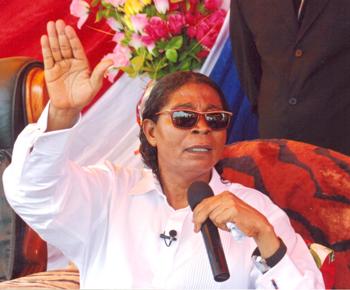 Organizers of the annual 4Syte Music Video Awards have justified their decision to award Apostle Kwadwo Sarfo Kantanka, a Lifetime Achievement Award, at this year’s event.

The decision to award the Apostle, at last Saturday’s awards, has generated a huge debate with many arguing that the organizers got it wrong by presenting him that award. Critics wondered what his contribution to the music video industry is to warrant the award.

But Ezekiel Tetteh, Committee Member of the 4Syte Music Video Awards, speaking in an interview on Rhythmz A-Z with Mamavi Owusu Aboagye Saturday, said organizers did the right thing by presenting him with the prestigious award.

He explained that, “When you take music videos, [they are] part of television content so we shouldn’t separate it from film and television, [they] come under that. If you take Apostle [he] has done a lot for the industry which people don’t know about.”

“His contribution into the television and film industry is huge. Some time back, there were only a few places that you could get production and post-production facilities even to hire in this country and he is one of the people that you get equipment to even shoot music videos and TV programmes from,” Izekel Tetteh added.

The Apostle’s Great KOSA, he noted, has been behind a lot of great productions and has also unearthed a lot of talents including Twi actor, Akroboto.

The 4Syte Music Video Awards Committee Member emphasized that Apostle Kwadwo Sarfo Kantanka “is behind a lot of things that people don’t know about and we thought it was wise for [us] to award him. We have to award our heroes before they leave us.”

I was in the Industry before Paw Paw surfaced – Aki